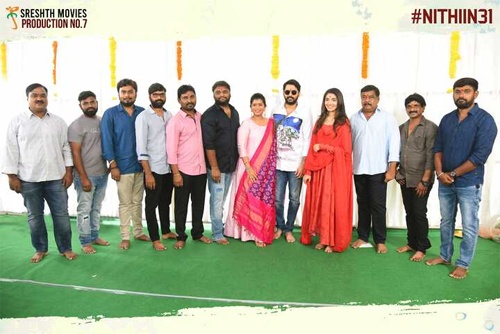 Hero Nithiin and happening young beauty Krithi Shetty are set to share screen space with each other in a new film. This as-yet-untitled film was launched this morning with a formal puja ceremony on the occasion of Vinayaka Chaturthi. Senior producer Allu Aravind was the chief guest at the event and he sounded the first clap. While Nithiin’s Bheeshma director Venky Kudumula handed over the script to the director, star director Anil Ravipudi has directed the muhurat shot.

This film marks Nithiin’s 31st outing in his career. Interestingly, popular film editor SR Sekkhar will be making his debut as a director with this film. The film’s title will be announced this evening at 5:30 PM through a motion poster. Nithiin’s father N Sudhakar Reddy and sister Nikitha Reddy are bankrolling this project under Shresth Movies banner. Mahathi Swara Sagar is composing the music and Prasad Murella is the cinematographer.