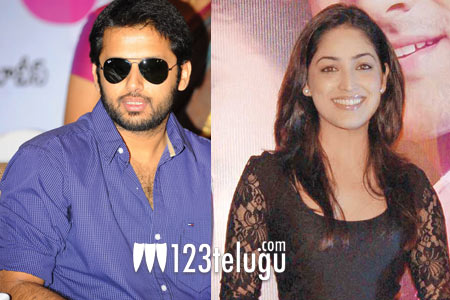 Nithin and Yami Gautam are teaming up for the first time for an upcoming Telugu film titled Courier Boy Kalyan. Prem Sai is directing the film and Gautham Menon is producing the film on Photon Kathaas banner. Recently, the film was shot in various locales in Hyderabad. Talking about the film’s progress, Prem Sai revealed that so far 50% of the film’s shooting has been wrapped up. Nithin and Yami’s onscreen chemistry is being touted as a major highlight of the film and Prem Sai even tweeted, “Nithiin and yami and make a fresh and interesting pair .. The combo wid be interesting on screen.” Satyam Rajesh and Harsha are playing important roles. Karthik is composing the music. Courier Boy Kalyan is slated for release in 2013. After completing this schedule of Courier Boy Kalyan, Nithin has moved on to shoot Gunde Jaari Gallanthayindhe with Isha Talwar.