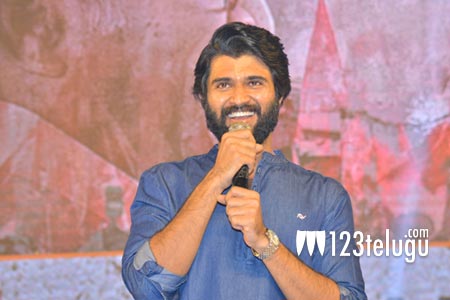 Vijay Devarakonda is going all out to promote his upcoming film NOTA. After interacting with the Tamil press last week, the actor addressed couple of huge public meetings held in Vijayawada and earlier today in Hyderabad, where he captivated everyone’s attention with his attitude.

Addressing his fans in Hyderabad, Vijay said, “There is a reports that people might get influenced after watching the film and press the NOTA button in the upcoming elections. Quite a few have filed affidavits that our film is in favour of a political party in Telangana. None of them are true, but the film has the power to influence the elections. It will change people’s attitude towards politics.”

Interestingly, he also launched his own production house, named as “King Of The Hill”, at the pre-release event. More details about Vijay’s production house are awaited.