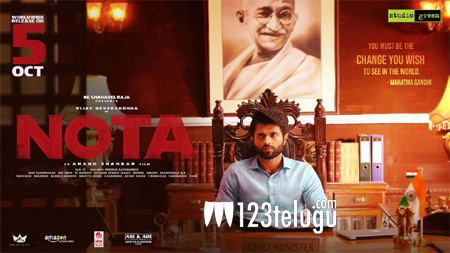 Finally, just a few hours ahead of its grand worldwide release, Vijay Deverakonda’s NOTA has cleared all the censor hurdles. After much suspense, the CBFC has cleared the movie with a UA certificate. The film’s runtime is locked at 149 minutes. The film’s Tamil version was given a U certificate and the film runs for 146 minutes, 3 minutes lesser than the Telugu version.

Following the controversies and court cases, NOTA’s censor was in a huge dilemma. The makers were asked to mute a few problematic words and they were happy to oblige. Meanwhile, NOTA’s US premiere collections look quite encouraging and the film is all set for a huge opening. Mehreen Pirzada, Nasser and Sathyaraj play important roles in the movie. Anand Shankar is the director.