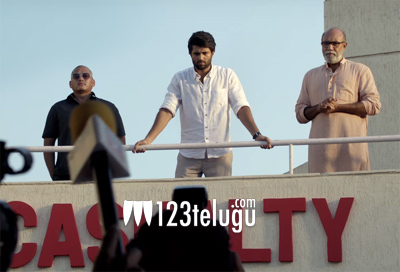 The much-awaited trailer of ‘NOTA’ was finally released by Surya today in both Tamil and Telugu. The first impression we get from the trailer is that Vijay’s Rowdy image is being used to full potential in this political thriller.

The set up looks realistic and Vijay is all game for yet another power-packed performance in the film where he plays a CM of the state. Things get interesting when star character actors like Nasser and Satyaraj are seen in key roles which adds a new dimension to the film.

The trailer has a bit of Tamil flavor as the film has been shot in the Tamil language primarily. Apart from this, the trailer looks gripping and will allow Vijay to prove his mettle as an actor.

Vijay makes his Tamil debut with this film which has been produced by Gnyanavel Raja.