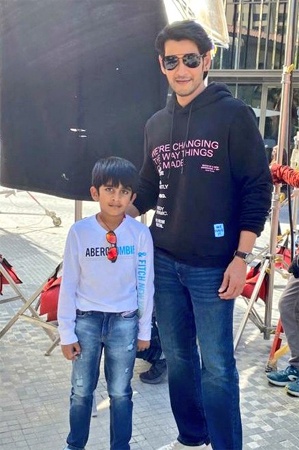 Gopichand Malineni made a strong comeback with the film Krack. Not many know that his son, Satvick did the role of Ravi Teja’s son in the film and was appreciated for his performance.

We have come to know that Satvick is a big fan of Mahesh Babu right from his childhood days. So, his dad, Gopichand took him to the sets of Sarkaru Vaari Paata and made him meet the superstar directly.

Seen here in the picture is Satvick along with the superstar himself. The teaser of SVP is out now and everyone is loving the new look of Mahesh Babu.