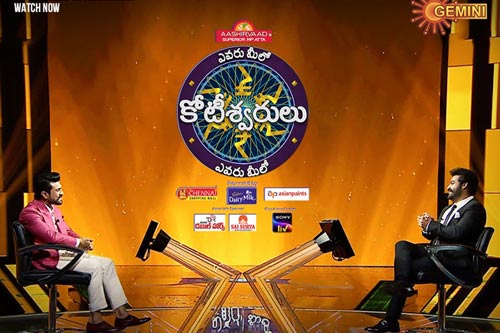 As expected, both NTR and Ram Charan rocked the show with their camaraderie. Both the stars looked dapper in suits and their respective RRR looks. In fact, Charan even said Tarak rocks in every outfit and that he looks even more smashing and killer in this suit look. And Tarak reciprocated, telling Charan,”You are the coolest man I’ve ever known in my life and a dearest friend.”

Charan said that it’s been a family tradition to donate part of their earnings to Chiranjeevi Charitable Trust, and that he will be donating his winning amount tonight to CCT. Sitting on the host’s seat, NTR asked Charan a question each on his father Chiranjeevi and uncle Pawan Kalyan. Both Tarak and Charan even sang Sydney Nagaram from Charan’s Orange.

Talking about RRR, Tarak said that the film will create history.. And Charan said that NTR fans will have a lot of surprises from his Komaram Bheem character. On the whole, it has been a memorable night for the fans of both the star heroes tonight.