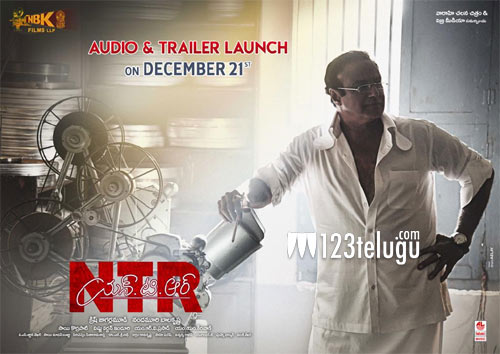 The makers of NTR biopic ‘NTR Kathanayakudu’ are all set to unveil the film’s much-awaited trailer on December 21 during the audio launch event in NT Rama Rao’s hometown Nimmakuru, Krishna district. Needless to say, expectations among fans and industrywallahs are quite high on the trailer and the audio album. NTR Kathanayakudu is slated to hit screens on January 9.

NTR Kathanayakudu’s shooting has been wrapped up and the post-production work is underway in full swing. Balakrishna is playing his father’s role in this prestigious biopic. Krish is directing the film and Sai Korrapati and Vishnu Induri are co-producing the movie along with Balakrishna. Veteran music composer MM Keeravani has scored the film’s soundtrack.