NTR second single-Keeravani does it again with Rajarshi
Published on Dec 12, 2018 10:31 am IST 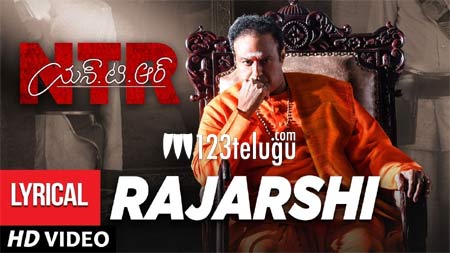 After the first song, Kathanayaka getting a superb response from the listeners, the makers of NTR biopic have released the second song Rajarshi. As expected, Keeravani hits the bull’s eye once again as there is a superb vibe about the song.

The lyrics are just mesmerizing and depict the helplessness of the people and how NTR is going to change all of that in his political journey. Keeravani’s singing adds a special zest to the song which has been terrifically composed by the master musician himself.

The lyrics are universal and the way the orchestra and chorus have been designed will surely give goosebumps to the audience in the theaters. Krish directs NTR biopic which has Balakrishna in a lead role.