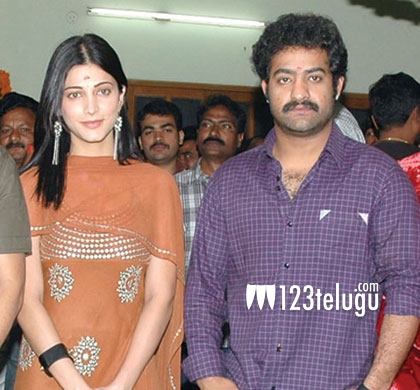 Young Tiger NTR and Shruti Haasan are participating in the shoot of ‘Ramayya Vastavayya’ at Ramoji Film City. Samantha is the heroine in this movie and Shruti Haasan is going to be seen in a special role that is crucial for the story.

Harish Shankar is the director of this movie and Dil Raju is the producer. Ramayya Vasthavayya is currently scheduled for a September 27th release.

NTR will be seen in a powerful and stylish avatar in this movie. Harish Shankar has reportedly penned some powerful dialogues for his hero in this film and fans are eagerly waiting for some fireworks on the big screen. Thaman is the music director for this movie.