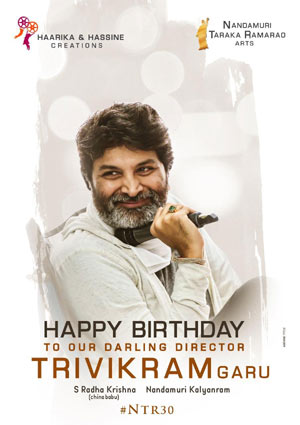 After weeks of confusion and multiple rumours about what NTR’s next project is going to be, the makers of #NTR30 have laid the rumours to rest. NTR’s project with Trivikram, which was announced a while ago, is very much on the cards, although there’s no clarity yet about when the shoot might start.

Few days ago, there were rumours that the team was having a hard time to figure out when NTR is going to get free from RRR shoot. A lot of people were left wondering if Trivikram would move on to another project in the meantime, and whether NTR himself would collaborate with another director considering the status of his long awaited film with Trivikram.

With the latest announcement, where the makers wished Trivikram on his birthday and that he’s the director for #NTR30, all rumours have been laid to rest. The film is going to be produced by Kalyanram and S Radha Krishna.