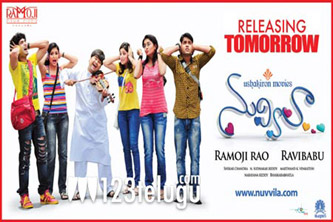 Director Ravibabu is confident that with his movie Nuvvila he has closely captured the emotional highs and lows that today’s youth go through. Its male protagonists include a budding musician and an aspiring young model while one of the female protagonists wants to be a budding entrepreneur. How these couples meet, build and sustain relationships while pursuing their other interests forms the core of the movie.

The director also said that he was so taken in by the script that he would not be surprised if he had allowed his life’s experiences to shape one of the key characters. When asked as to why his movies always have new faces, the director said that all his choices had a love for Cinema that he found appealing.

As an example he spoke about actors Anand (from Hyderabad), Havish (a US-returned Engineer from Vijayawada) and Yaami (from Mumbai). He said the three of them had an interest in Cinema that he as a director could connect very easily to.