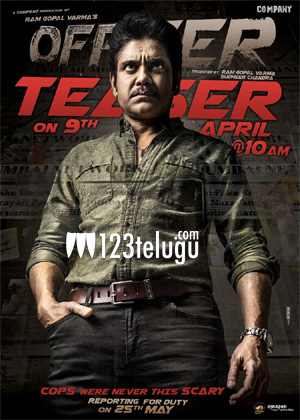 It is well known that the shooting of Akkineni Nagarjuna and ace director RGV’s upcoming intense cop drama, Officer, has almost wrapped up. Currently, the post-production activities and dubbing works are going on in a full swing.

Meanwhile, on the occasion of Ram Gopal Varma’s birthday, the movie’s unit has announced that Officer’s teaser will be unveiled on 9th April at 10 AM. Nagarjuna and Ram Gopal Varma are teaming up with each other after 24 years since their last release, Govinda Govinda.

Mumbai starlet Myra Sareen is the film’s female lead. R Company banner is bankrolling the project. Officer will be hitting the screens on May 25.