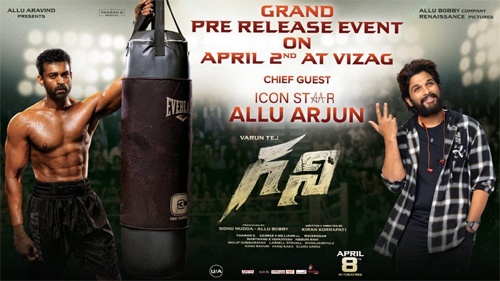 Mega Prince Varun Tej is all set to enthral the audience with his performance in the boxing drama, Ghani. Scheduled to hit the theaters on April 8, 2022, the movie is directed by Kiran Korrapati.

Now, the latest news is that the Icon Star Allu Arjun will grace the pre-release event of Ghani as the chief guest. It is also confirmed that the event will happen in Vizag on April 2, 2022, in a grand manner. The makers have announced it online by releasing a special poster.

Bollywood actress Saiee Manjrekar is playing the lady love of Varun in this movie. Upendra, Suniel Shetty, Nadhiya, Naresh and others are also a part of this movie. Produced by Sidhu Mudda and Allu Bobby, the movie has the music of the music sensation, Thaman S.