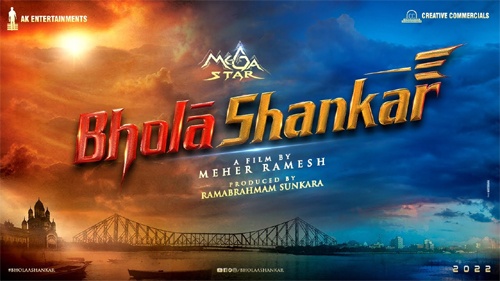 On the occasion of Chiranjeevi’s 66th birthday, hero Mahesh Babu has just unveiled the title and first look of the Megastar’s much-talked-about action family entertainer under Meher Ramesh’s direction. As being speculated, this exciting film has been titled Bholaa Shankar.

Bholaa Shankar, like its Tamil original Ajith’s Vedalam, has Kolkata as its backdrop. The iconic Howrah Bridge can be seen in the motion poster. The film is being produced by Anil Sunkara under AK Entertainment banner. The regular shooting will kick-start soon. Stay tuned for further updates on the film’s cast and crew.

Happy birthday @KChiruTweets garu🤗 Honoured to be unveiling the title of your film! #BholaaShankar, under the directorial skills of my good friend @MeherRamesh and my favourite producer @AnilSunkara1 garu

May the year ahead bring you great health and success. All the best sir! pic.twitter.com/U9czmnIK5I