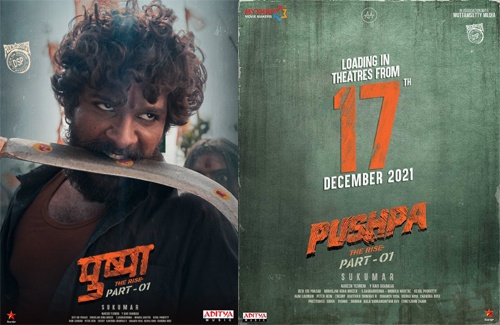 The makers of Allu Arjun and Sukumar’s highly-anticipated pan-India action drama, Pushpa, have just announced the film’s release date. The team had earlier announced that Pushpa’s first part, Pushpa The Rise, will be hitting the big screens during the Christmas weekend.

Now, the makers officially announced that Pushpa’s first part will be opening in cinemas worldwide on December 17, as being speculated. The makers have come up with this clarity now as production houses across the country have been busy announcing the release dates of their movies for the last few days. Apart from Telugu, Pushpa will also have a big and simultaneous release in Tamil, Malayalam, Kannada and Hindi. The second part will be out in summer 2022.