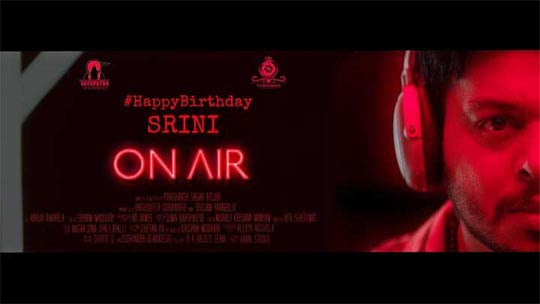 The film is directed by Prashanth Sagar, an associate of Star Writer V Vijayendraprasad. The first-look poster and theme of the film are highly innovative which promises a unique experience for the audience.

Produced by Raghuveer GoriParthi under his Vatuputra Entertainment banner, the film deals with a very engaging plot about how a call Srini receives on his first day as RJ changes his entire life. MG Srinivas Plays The Role Of An RJ in ‘On Air’.

On the occasion of Srini’s Birthday on July 9th, Team has released a glimpse of ‘ON AIR’ wishing him a happy birthday. The glimpse reflects the mood of the film with a haunting background score.