Megastar Chiranjeevi celebrates his 65th birthday today and his fans across the world are celebrating it like a festival. Millions of fans are taking to social media to extend their warm wishes to the stalwart actor. And the most special wishes have come from none other than Chiru’s younger brother Pawan Kalyan.

Pawan released an open letter via Janasena social media accounts to wish his brother. Pawan said that he considers his brother and sister-in-law as his parents. Hailing Chiru to the sky, Pawan said that his brother began his life journey in an ordinary middle-class family and witnessed an extraordinary rise due to his hard work. “His immense hard work continues to inspire everyone,” Pawan wrote. 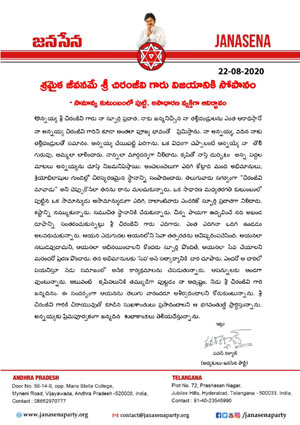