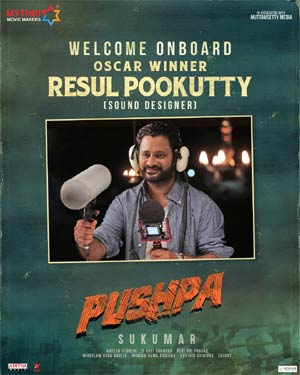 With each passing day, Allu Arjun’s Pushpa is getting bigger and better. The latest addition to the team is Oscar-winning sound designer Resul Pookutty.

Resul has worked on so many big films and, joining a film as Pushpa will only enhance the project. The film has a forest-based backdrop and sound design plays a key role. So, the makers have roped in Resul for this film.

The teaser of the film will be released today and the sound design is going to be exceptional as per the update. A special event has also been planned at JRC Convention, Hyderabad to launch the teaser.

Sukumar directs Pushpa, which has Rashmika as the heroine. Watch this space for more updates on this project.