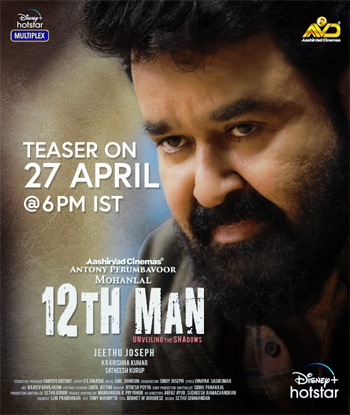 Malayalam Superstar Mohanlal is coming with another intriguing thriller titled 12th Man. Directed by the famous filmmaker Jeethu Joseph, the movie has made the headlines again.

It is already known that the movie has skipped theatrical release and is going to premiere on the OTT platform, Hotstar. Now, the latest news is that the official teaser of 12th Man will be out tomorrow at 6 PM.

Unni Mukundan, Anusree, Anu Sithara and others are also a part of this mystery thriller. Produced by Aashirvad Cinemas, the movie has the music of Anil Johnson.