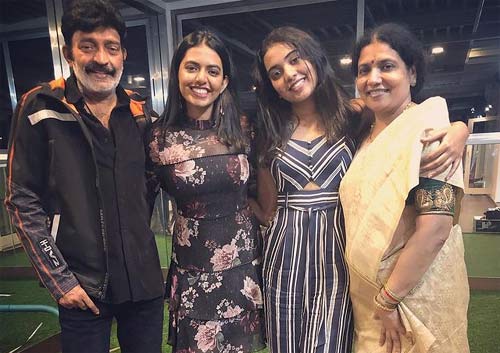 Senior star couple Jeevitha and Rajasekhar are proud of their daughters Shivani and Shivathmika. Their elder daughter Shivani’s debut film, Adbhutam, had premiered on Disney+ Hotstar last week, and her performance as a chirpy young girl has been received well.

Jeevitha and Rajasekhar interacted with the media recently to share their happiness on Shivani’s debut film’s success. “Shivani’s debut film ‘2 States’ was shelved. Another film I had planned for her under my production also couldn’t materialize. We are finally happy to see Shivani getting a good response for Adbhutam. Shivani and Shivathmika made us proud with Adbhutam and Dorasani,” said a proud Jeevitha.

Shivani said, “a couple of movies that I had signed as my debut were shelved. Even though my debut film, Adbhutam, released on OTT, audiences’ appreciation has left me thrilled,” said Shivani.