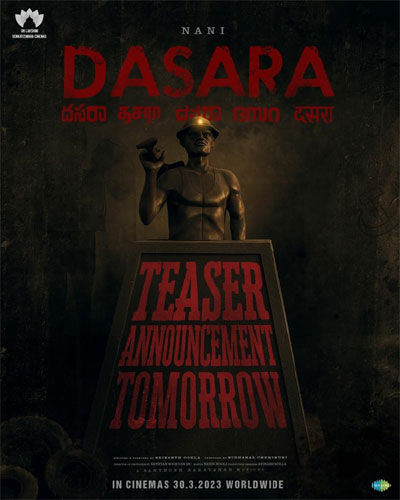 Natural star Nani will next feature in his debut PAN Indian film Dasara, directed by debutant Srikanth Odela. Dasara has huge expectations around it and is already done with its shooting part. Recently Nani conducted a fans meet where he assured the admirers that the movie would be great.

The latest news is that the film’s teaser announcement will be coming out tomorrow. As Nani has done roles mostly like a boy to next door, it will be exciting to watch him in an out-and-out mass entertainer. Keerthy Suresh is the leading lady. Dheekshith Shetty plays a crucial role.

The movie will hit the screens on 30th March 2023. Produced by Sudhakar Cherukuri under the banner of Sri Lakshmi Venkateshwara Cinemas, the film has Samuthirakani, Zarina Wahab, and Sai Kumar in other vital roles. Santosh Narayanan is providing the soundtracks.