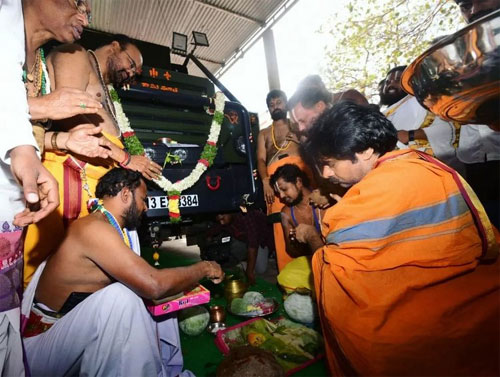 Powerstar Pawan Kalyan will be next seen in Hari Hara Veera Mallu, a period action drama directed by Krish. The actor also got multiple projects in his pipeline. Not just the movies, the star actor is also allocating time to his political activities.

A special vehicle was built for Pawan’s political campaigning, which is named Varahi. The Janasena President offered special prayers today for Varahi at the iconic Kondagattu Anjaneya Swamy temple in Jagtial, Telangana.

He sought the blessings of Lord Hanuman before kickstarting his election campaign. Pawan Kalyan is spotted in traditional attire, and pics of the same are going viral on social media. In all probability, Pawan might have two releases before the 2024 elections.