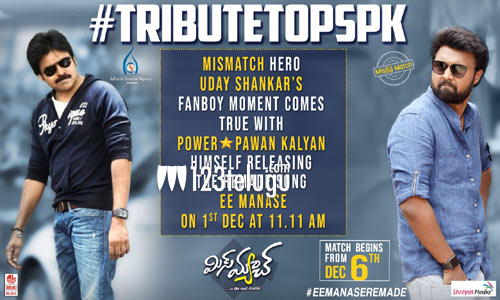 Mismatch, the upcoming Telugu romantic entertainer featuring Kannada hero Uday Shankar and Tamil actress Aishwarya Rajesh in lead roles, has been creating a good buzz for the last few days. And today is a big day in the film’s promotional journey.

Mismatch’s makers have remade Ee Manase song from Pawan Kalyan’s blockbuster yesteryear romantic drama, Tholi Prema. What’s exciting is that Pawan himself will be launching the remix version this morning at 11:11 am.

Mismatch is gearing up for its worldwide release on December 6. NV Nirmal Kumar has directed the film and Adhiroh Creative Signs banner has bankrolled the project. Gifting Elias is the music composer