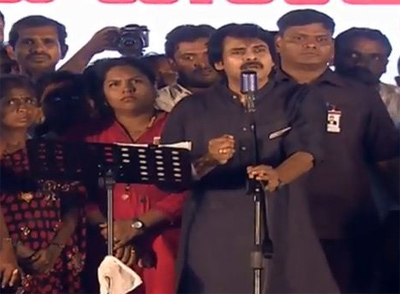 Film star and Janasena Party President Pawan Kaylan gave a spirited speech at the Janasena plenary on the occasion of the party’s formation day in Guntur this evening. Pawan vehemently criticized the ruling parties and Janasena’s 2014 poll partners TDP and BJP for the sad state of affairs in Andhra Pradesh.

Pawan further said that his party will contest the upcoming local body elections. He also announced that Janasena manifesto will be released on August 14. Tomorrow, Pawan will be interacting with several NRIs who have flown in from the US, Australia, Kuwait and other countries.