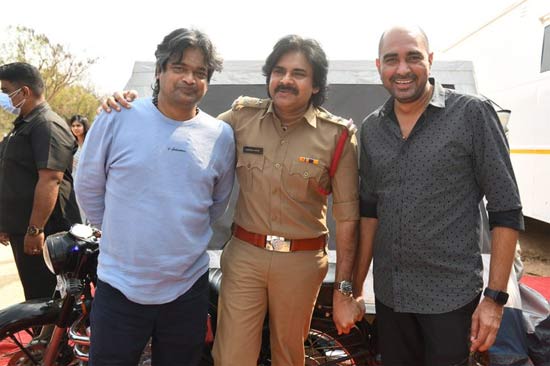 Pawan Kalyan and Rana Daggubati starrer Bheemla Nayak is all set to hit the screen worldwide on February 25, 2022. The movie, directed by Saagar K Chandra, has Nithya Menen and Samyuktha Menon as the females.

Successful director, Krish Jagarlamudi, who is doing a high-budget movie, Hari Hara Veera Mallu, with Pawan Kalyan, has posted a powerful pic of him with the actor on social media. The viral pic also has the director, Harish Shankar, who is doing Bhavadeeyudu Bhagat Singh, with the Powerstar.

The picture has been captured today on the sets of Bheemla Nayak. The powerful picture has gone viral in no time. To note, the movie’s shooting will be finished by the end of the day.

Produced by Sithara Entertainments, the movie has the music of the young sensation, Thaman S. The makers are planning to release the trailer and hold a pre-release event in the coming days.