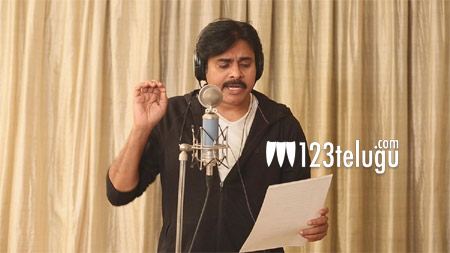 The most eagerly awaited Kodakaa Koteswar Rao song sung by Power Star Pawan Kalyan for his upcoming Sankranthi entertainer, Agnyaathavaasi, is out finally and fans couldn’t have asked for a better New Year Eve treat. Pawan’s ease and energy as he renders the cheeky lines in this teasing song are infectious.

Kodakaa Koteswar Rao is penned by Bhaskarabhatla. The popular lyricist has come up with some hilarious wordplay which has been brought to life by Pawan’s vocals and Anirudh’s bright and lively orchestration. Kodakaa Koteswar Rao song is picturized against a software office backdrop and the song is sure to enthrall the masses once the film hits the screens.

Agnyaathavaasi is directed by Trivikram and it stars young beauties Keerthy Suresh and Anu Emmanuel as the female leads. S Radhakrishna has produced the movie. The film is releasing on January 10.