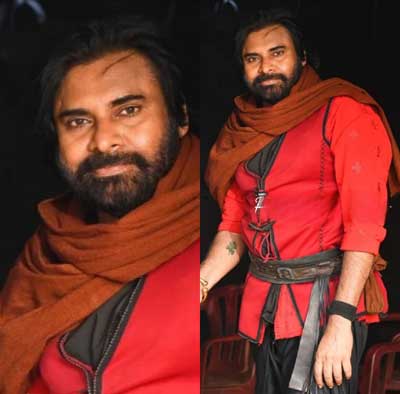 Powerstar Pawan Kalyan fans are yet to come out of the celebration mood after the star’s next film is announced with Sahoo director Sujeeth. But on the other hand, Pawan is participating in the shoot of Hari Hari Hara Veera Mallu, which releases next year.

A powerful snap of the actor from the film’s set just surfaced on the internet, which is already spreading like wildfire. Pawan looks royal and handsome with a thick beard in a red outfit. The fans were expecting a similar look from Pawan, and they are very satisfied with the picture now.

This is a period-action drama directed by Krish and has sky-high expectations on it. Nidhi Aggerwal plays the female lead, and the project is produced on a large scale by A. Dayakar Rao. MM Keeravani is composing the tunes.