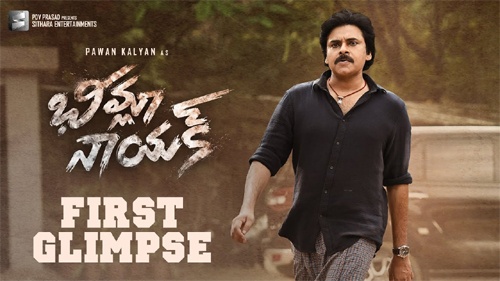 On the occasion of India’s 75th Independence Day celebrations, the makers of Pawan Kalyan and Rana Daggubati’s highly-anticipated Ayyappanum Koshiyum Telugu remake unveiled the film’s first glimpse video and title poster this morning. This intense action drama is titled Bheemla Nayak, after the name of Pawan’s policeman’s character in the movie.

Released at 9:45 AM amid high expectations, Bheemla Nayak’s glimpse video has taken social media by storm thanks to the out-and-out mass rampage by Pawan in a mass and angry young man avatar. So far, the video has clocked nearly 4.5 million views with close to 550K likes, becoming the most liked Tollywood glimpse video ever within just a few hours of its release.

Bheemla Nayak also features talented actresses Nithya Menen and Aishwarya Rajesh as the female leads. Being directed by Saagar K Chandra, the film is produced by Naga Vamsi under Sithara Entertainments banner. Trivikram has penned the screenplay and dialogues, while Thaman is composing the music for this Sankranthi entertainer.