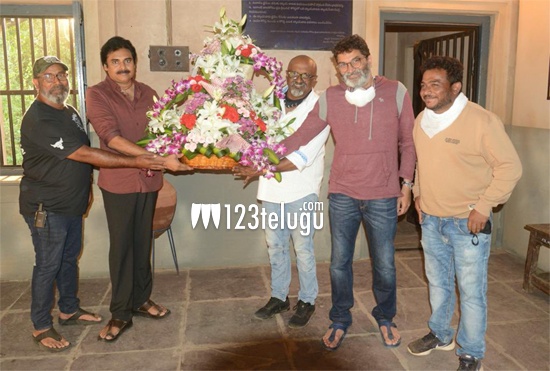 Popular South and Bollywood cinematographer Ravi K Chandran is currently cranking the camera for Pawan Kalyan’s Bheemla Nayak. The teasers and the song lyrical videos that have been released so far impressed everyone with the splendid visuals captured by the ace lensman.

On Friday night, Ravi K Chandran took to Twitter and tweeted a few pictures wherein Pawan, Trivikram, Saagar K Chandra and others unit members were parenting him a beautiful flower bouquet. The bouquet had a special handwritten note by Pawan himself. “Dear Ravi K Chandran sir, for your sheer visual brilliance, thank you for being a part of Bheemla Nayak. You made the difference which is pivotal, Pawan Kalyan,” the note read.

Ravi K Chandran went on to reveal that Pawan had watched Bheemla Nayak’s edited footage and was very impressed with the visuals. Needless to say, Pawan’s special gesture has left the star cinematographer overwhelmed.

Humbled by the magnanimous way @PawanKalyan garu expressed his views after watching the edited footage of #Bheemlanayak and a wonderful hand written note from PK sir and #Trivikram sir made my day. pic.twitter.com/GLDOcWOhyp