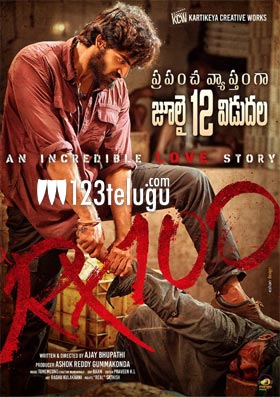 RX100, this small film has been creating a lot of buzz ever since the film’s teaser and trailer were released a few weeks ago. This intense romantic action drama stars Karthikeya and Payal Rajput as the main leads. Ajay Bhupathi, a protege of Ram Gopal Varma, is making his directorial debut with this film.

Ajay Bhupathi made a few striking comments during RX100’s second trailer launch event last night. “I hate routine movies. I request people who love watching routine movies to not watch my film. If RX100 fails at the box-office, I’ll go back to my village and look after my cattle,” said Ajay Bhupathi.

RX100 is produced by Ashok Reddy Gummadikonda. Ramky and Rao Ramesh play important roles in the movie. RX100 is hitting the screens on July 12.