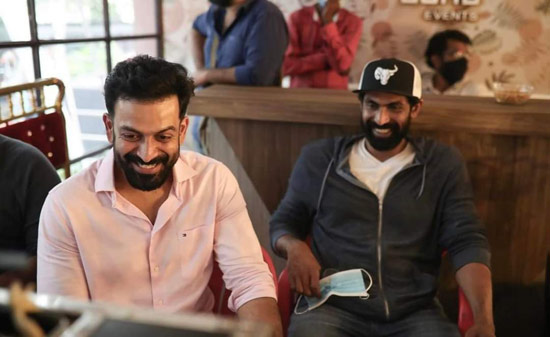 Tollywood actors, Pawan Kalyan and Rana Daggubati starring Bheemla Nayak, is one of the most awaited Telugu films. It is already known that the multi-starrer is an official Telugu remake of the Malayalam hit movie, Ayyappanum Koshiyum, released in 2020.

Today, Mollywood star Prithviraj Sukumaran has shared a special picture on social media. In the throwback picture, Prithviraj is accompanied by Rana Daggubati, who is reprising the role played by the actor in Malayalam.

The picture was captured during the shoot of Prithviraj’s directorial Bro Daddy in Hyderabad.

Rana is playing Daniel Shekar, a powerful person who locks horns with a fierce policeman, Bheemla Nayak. Malayalam beauties Nithya Menen and Samyuktha Menon are the heroines in the movie.

Directed by Saagar K Chandra, the film is in the final leg of the shoot and is all set to hit big screens on 12th January 2022.