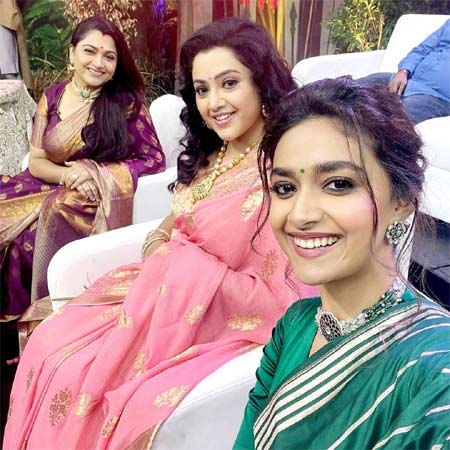 Here’s the National award-winning actress Keerthy Suresh posing with senior actresses Meena and Khushboo in this viral selfie. The picture was taken during Annaatthe’s pre-release promotions in Chennai earlier today.

While Keerthy looks elegant as ever in a green saree, Meena and Khushboo are looking ravishing in pink and violet sarees respectively. As per her principle, star heroine Nayanthara has given the promotional event a miss.

Annaatthe stars Rajinikanth in a lead role. The film is directed by Siva and produced under Sun Pictures banner. The film is slated to open in cinemas worldwide on November 4 as a Diwali festive treat.