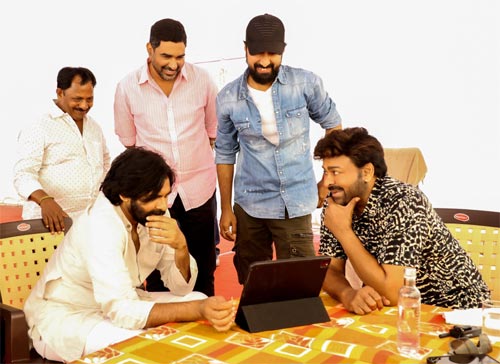 Megastar Chiranjeevi fans are so eagerly waiting for the arrival of the first single, Boss Party, from his next film Waltair Veerayya. The promo of the same was out today, and it seems the song would be an out-and-out mass number in the vintage style of Chiru.

The makers have just now released a picture that is already setting the internet on fire. Seen here in the picture is Power Star Pawan Kalyan enjoying the Boss Party song along with Megastar. The fans are so happy with the image and couldn’t ask for anything better.

Also, Waltair Veerayya’s director Bobby and Hari Hara Veera Mallu’s director Krish Jagarlamudi were seen in this picture, along with the powerful brother duo. The makers are promising that the song would create a huge destruction. So let’s see how the song would turn out to be.