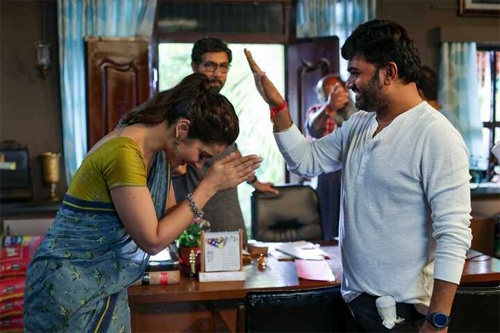 This funny on-location picture shows actress Raashi Khanna breaking into laughter as she takes the ‘blessings’ of director Maruthi. The photograph was captured on the set of their upcoming film, Pakka Commercial. Releasing the picture, the makers called it “Blessings of Wit.” Dressed in a sari, Raashi looks elegant and beautiful.

Pakka Commercial has action hero Gopichand playing the male lead. The film is nearing completion. While it’s the first time that Gopichand is teaming up with Maruthi, the director had earlier worked with Raashi on Prathi Roju Pandage. Pakka Commercial is being produced by Bunny Vas, SKN and UV Creations.