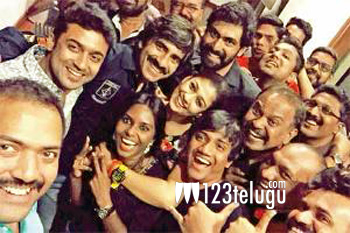 123telugu has already reported that the shooting of Suriya’s new film “Mass” is progressing steadily in Hyderabad. The unit has been shooting some crucial scenes on the lead cast from the past 15 days. They were treated to a pleasant surprise when hero Raviteja and Rana Daggubati visited them at the sets and greeted the unit.

Suriya has a very good rapport with the people from the Telugu film industry and he will also be a part of ‘Memu Saitham’ event being organized for Hudhud relief. Mass has Nayanatara playing the love interest of Suriya. The first look which was released during Diwali got a very good response from the audience and it has raised the expectations on this action entertainer. Venkat Prabhu who last directed Karthi’s Biriyani is directing this flick.