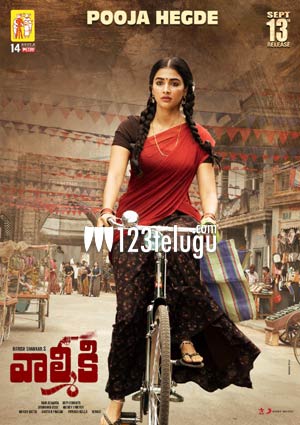 Here’s a pleasant surprise from team Valmiki. The film’s heroine Pooja Hegde today released her look in the film. Pooja plays a village girl named Sridevi. She looks endearing in a half sari as she rides a bicycle. After DJ and Maharshi, this is a complete makeover for the svelte beauty.

In Valmiki, Pooja shares screen space with Varun Tej and Tamil hero Atharvaa Murali. She reprises Lakshmi Menon’s role from the film’s Tamil version, Jigarthanda, and it’s a role to be watched out for when the film hits screens.

Valmiki is being directed by Harish Shankar and produced by Ram and Gopi Achanta. The film is releasing on September 13.