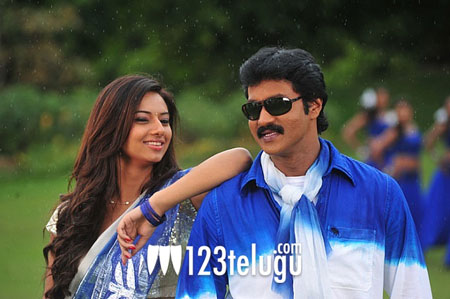 Poolarangadu is the upcoming action entertainer starring Sunil and Isha Chawla. The movie’s audio album was launched today at a grand function held at Hotel Katriya in Hyderabad. The event was attended by many celebrities and all of them wished the team of Poolarangadu the very best. Music for the movie was provided by Anoop Rubens. Director Veerabhadram and Producer Atchi Reddy thanked the guests for coming and expressed confidence in the movie’s outcome.

The first song in the album was launched by popular director Harish Shankar. Directors Deva Katta, S.V.Krishna Reddy and hero Aadi did the honours for other songs. Manchu Manoj and Director Sukumar were some of the other popular guests who attended. A few other guests could not make it to the venue due to traffic issues.

Sunil was the center of attraction with his new look and muscular body. He thanked his physical trainer Salim for getting him into shape and said that though the transformation was not easy, the result made it worthwhile. Heroine Isha Chawla expressed her happiness at getting a chance to work in this movie.