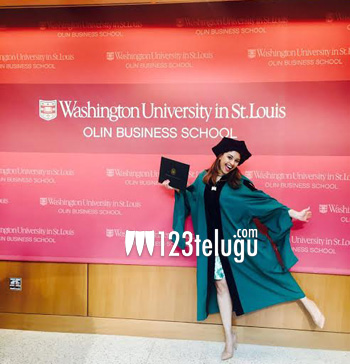 After winning the Miss India USA title way back in 2007, American NRI of Bengali origin Richa Gangopadhyay made her Tollywood debut with Rana’s first film, Leader, in 2010. Richa later acted in a few hit films in Telugu, Tamil and Bengali such as Mirapakay, Mirchi, Mayakkam Enna, Osthe and Bikram Singha etc.

However, Richa suddenly quit acting and headed back to America and joined herself in an MBA program at the reputed Washington University’s St. Louis campus.

Yesterday, Richa took to her Twitter and posted a few pictures from her graduation ceremony and announced that she has finally earned an MBA degree. Whether the actress will return to movies is still a mystery.