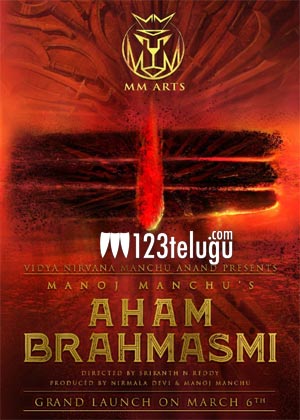 After a gap of 3 years, hero Manchu Manoj is soon going to make his acting comeback. What’s special about his comeback is that Manoj is also turning producer with the film. He had launched his production house MM Arts a couple of months ago.

In a pleasant surprise for all his fans this morning, Manoj revealed the title poster of his maiden production venture. The film has been titled Aham Brahmasmi. The formal launch will take place on March 6. Manoj is co-producing the film along with his mother Nirmala Devi, with his niece Vidya Nirvana Manchu Anand presenting the movie. Debutant Srikanth N Reddy will be directing the movie. Nabha Natesh is rumored to be the film’s leading lady.