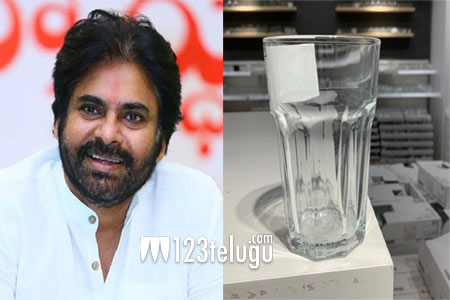 Powerstar Pawan Kalyan, the founder of Jana Sena Party, is quite pleased with the Election Commission’s decision to give a ‘Glass Tumbler’ as the party symbol for Jana Sena. Thanking the Election Commission, he stated that he has a lot of childhood memories related to glass tumbler and it’s also a common man’s identity in the country.

It was quite crucial for the party to secure a party symbol much in advance, since the lack of a common party symbol could have turned out to be a huge obstacle to its progress in the upcoming elections. Now that the party has received the symbol, it is quite evident that Jana Sena will compete in upcoming general elections in Andhra Pradesh, and also the Lok Sabha elections in both the states.

Meanwhile, Pawan Kalyan is busy raising funds for the party, and also he is expected to conduct a series of meetings with the party leaders to plan their next move in the political arena.

My wholehearted thanks to ‘Election commission’ for giving us ‘Glass Tumbler’ as our Party symbol. Personally for me that ‘Glass Tumbler’ has many memories from my childhood and it’s common man’ s identity in our country. pic.twitter.com/hoIZ5oF4nl