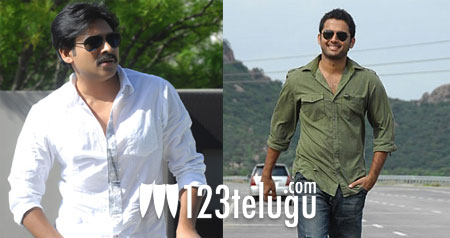 Powerstar Pawan Kalyan is going to be one of the chief guests at the audio launch of Nithin’s upcoming film Ishq. Earlier today, Nithin went to the sets of Gabbar Singh and invited Pawan Kalyan for the audio launch and the latter obliged. Interestingly, Dasari Narayana Rao and S S Rajamouli are also reportedly going to grace the audio launch. Directed by Vikram Kumar, the film is touted to be an urban love story. Nithya Menen is playing the lead role opposite Nithin. Recently, couple of songs were shot in Kerala and Kullu Manali. Anup Rubens has composed the music and PC Sreeram is the cinematographer. The film’s audio will hit the stands on February 2 and the movie is expected to hit the screens in the third week of February.