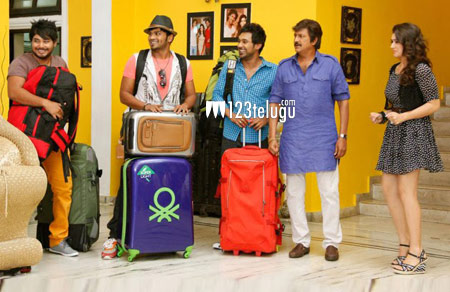 Mohan Babu, Vishnu Manchu and Manchu Manoj starrer Pandavulu Pandavulu Thummedha is all set to hit the screens on January 31, 2014. Mohan Babu himself confirmed the news on Twitter and he also revealed that a promo song will be unveiled on January 1. Initially, the makers were contemplating to release the film for Sankranthi; however, it’s now confirmed that the film has been pushed to January 31.

Srivas has directed the film and it also stars Varun Sandesh, Tanish, Raveena Tandon, Hansika and Pranita Subhash in lead roles. The film is said to be a hilarious family entertainer and in recent times, the film has been in news for Manoj’s characterisation. He’ll reportedly be seen both as a cop and also as a lady. Sources close to the production team say that these scenes featuring Manchu Manoj as a lady have come really well.

Manchu Vishnu and Manoj Manchu have produced the film under 24 Frames Factory and Sri Lakshmi Prasanna Pictures banner. More details about the film will be revealed soon.