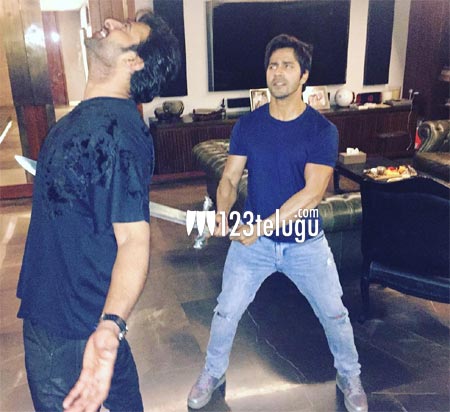 Yesterday night, noted Bollywood director, Karan Johar hosted a private party for all the leading stars in Bollywood. The party was also attended by Baahubali stars Rana and Prabhas.

Karan hosted this party mainly for Prabhas who was holidaying in the US all this while. Mumbai sources reveal that Prabhas was the center of attraction during the entire night as Bollywood heroes found his company quite joyful.

Prabhas is a very shy and down to earth person and this quality of his, sources say, was highly appreciated by everyone present there. One of the heroes, Varun Dhawan was also having a Baahubali moment as shown in the picture above.

Post Baahubali, Prabhas is a huge star all over India and fans are going crazy about him these days.