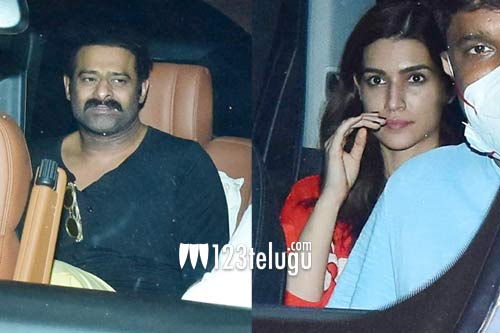 It was reported last week that star hero Prabhas and Bollywood actress Kriti Sanon had resumed the shooting for their highly-anticipated mythological magnum opus, Adipurush, in Mumbai. Since this evening, a few pictures of Prabhas, Kriti and Sunny Singh, the actor who plays Laxman, have been making a splash on social media.

Apparently, Prabhas, Kriti and Sunny were papped while they were returning after a dance rehearsal. The trio will be shooting for a special dance number, which will be canned this week. A major portion of the film’s shoot is being taken place in a studio using the green and blue screens.