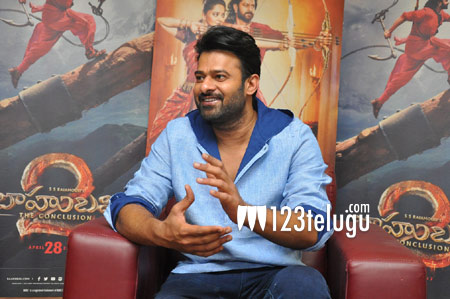 It’s not everyday that you hear Prabhas talk about his personal life, but the ongoing promotional campaign for Baahubali 2 has changed all that. The actor has been revealing interesting tidbits about his life beyond cinema and some of them have caught his fans by surprise.

In a recent interview to a leading newspaper, Prabhas confessed that he’s extremely lazy as a person and that he always needs something to keep him pre-occupied. “I am extremely lazy. I need to be entertained always and so I surround myself with some form of the entertainment or other like – music, movies, games etc. There seem to be two people inside me. I sometimes become the person who takes a holistic approach in making even a small decision. At other times, I become the one who is too lazy to think and forget to take a decision. It baffles my friends. Then, I am a deep thinker and no one knows about it. Until last year, I didn’t know but I guess I am emotional too,” Prabhas revealed.

Baahubali 2, directed by SS Rajamouli, is slated for release on April 28.