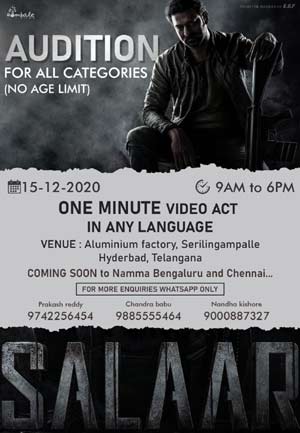 Prabhas and KGF director Prashanth Neel’s highly-anticipated gangster drama, Salaar, is all set to kick-start its shooting formalities from early next year. This morning, Prashanth took to Twitter and invited all the aspiring actors of all age groups to take part in the auditions in Hyderabad.

The auditions will take place from 9 am to 6 pm on December 15 at Aluminium Factory on the outskirts of Hyderabad. Actors who speak any language are eligible to participate in the auditions. Two more talent hunts for Chennai and Bengaluru actors will be held in the respective cities and the dates for the same will be announced soon.