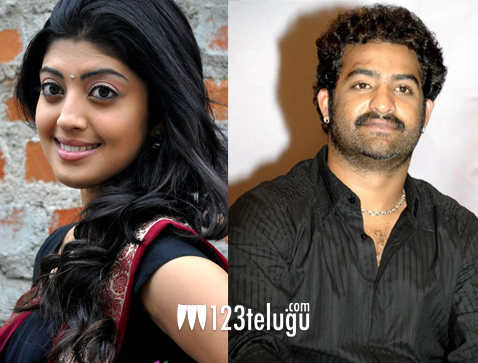 Pranitha Subhash who made her debut with ‘Yem Pillo Yem Pillodo’ couldn’t get the right break as her next releases turned out to be duds at the box office.

Her recent film ‘Atharintiki Daredhi’ has become industry hit and now offers are pouring in for Pranitha. However, she is carefully making her choices and right now she has been signed for a big production. Pranitha is playing the second lead in NTR’s upcoming film. ‘Rabhasa’ is the tentative title of the project. Ironically, Samantha is playing the lead role in the movie. The shooting of the movie is currently going on at a brisk pace in Ramoji Film City.

Santhosh Sreenivas who hit the right chord with ‘Kandireega’ is the director of the film and Bellamkonda Ganesh Babu is producing this movie under Sri Lakshmi Narasimha Productions.