Prassthanam’s intense trailer hints at a faithful remake
Published on Aug 30, 2019 7:00 am IST 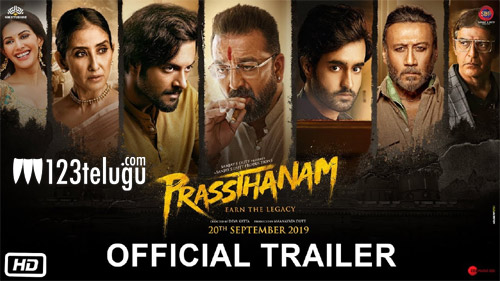 After the gripping teaser which was released a few weeks ago, the theatrical trailer for Prassthanam, the Hindi remake of Deva Katta’s acclaimed 2009 political drama, Prasthanam, is out this evening. The trailer hints that Prassthanam is a faithful version of its Telugu original.

In Prassthanam, Bollywood star Sanjay Dutt reprises Sai Kumar’s memorable act. The Hindi version is set in an authentic milieu in Uttar Pradesh, and it showcases a greedy battle for power. The trailer features some powerful dialogues rendered by the lead actors.

Ali Fazal plays Sharwanand’s role in the Hindi remake. Jackie Shroff, Manisha Koirala and Chunky Pandey play key roles in the movie. Prassthanam is gearing up for release on September 20. Sanjay Dutt has produced the movie.