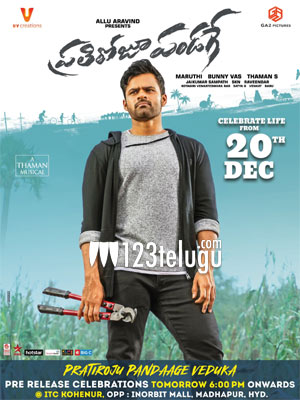 Maruthi’s Pratiroju Pandage is one film that is creating a good buzz all over as the film is nearing its release. The film will be out on the 20th of this month in a grand manner.

The latest we hear is that the pre-release event of the film will be held in Hyderabad in a special way tomorrow evening. The entire cast and a special guest will be gracing this event.

Thaman has scored music for this film which is being produced by Bunny Vas. Raashi Khanna and Satyaraj play key roles in this family entertainer. Watch this space for more updates on this project.